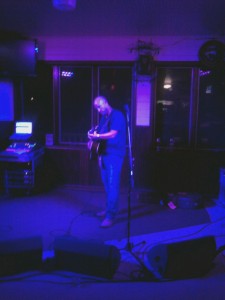 “This song goes out to Anne, my number one fan.”

Well I did it again.  I met a rock star and I totally geeked out.  Sadly, this has not been my first awkward celebrity encounter, and not all of them have been with rock stars.

I take you back to high school.  As odds would have it, my childhood babysitter Maggie was getting married to a guy named Sean Cronin.  Well, Sean’s brother is none other than Kevin Cronin, aka The Lead Singer of REO Speedwagon. Lucky for me, I was a wedding guest, so I actually got to see Kevin sing “I Can’t Fight this Feeling” during the ceremony.  I also got to see him join the wedding band for a few numbers (he did a mean “Johnny Be Good”).

But perhaps the funniest part was when the band rolled out The Chicken Dance.  The dance floor immediately filled with flapping, clapping, shimmying Wisconsinites.  As for Kevin, he stared at us all, eyes wide and mouth open in amazement.  I honestly don’t think he had ever actually seen The Chicken Dance before.  I can only imagine what his L.A.-living, rock star head (of quite curly hair, I might add) was thinking.  For the record, I don’t care what anyone says:  you are never too cool for The Chicken Dance.  If it comes on, you just join in, period.

So here’s where the awkward part comes in.  Of course I wanted Kevin’s autograph, and the bride’s father got wind of this.  Before I could say “Riding the Storm Out”, he takes my hand, marches me up to Mr. REO Speedwagon and declares, “This young lady would like your autograph!”  I don’t really remember what transpired next, but I do know that I got a 3×5 index card with his autograph scrolled on it, along with “Hi Anne” and a big smiley face.  Pretty impressive, right?

It’s not like there haven’t been other awkward encounters with celebrities.  There was the mute encounter with Woody Harrelson where I just got my picture taken with him.  There was a convention where I got to ask Tim Gunn a question from the audience while my microphone shook violently the entire time.  (Make it work, Anne, Make it work!)

So a couple years have passed since my gush-filled convo with Tim Gunn.  I am much, much more composed and mature now, right?  I can handle my celebrities.

You know where this is going, right?  Yet again I turn into a shy 13-year-old.  Either that or Cindy Brady in that episode where she was on a  t.v. quiz show, got stage fright and ended up staring at the bright red “on air” sign the whole time.

I take you to the scene of the awkwardness.  Date:  Friday, August 19th, 2011.  I have made plans to see one of my favorite bands from college, The Freddy Jones Band.  In the early nineties they were a pretty big deal, comparable to Big Head Todd and the Monsters and The Bodeans.  One of my all-time favorites songs is their most known hit, “In a Daydream”, which I recently blogged/gushed about.

So it happens that two of the members of the band are coming to Fontana, Wisconsin, to do an acoustic set at a lakeside bar “where it all started” for them.  As I was waiting for the band to go on, I struck up a conversation with a couple who looked like they had gotten there early.  It turns out that the man had gone to school with the band since 4th grade.  No way.  Way.  Now mind you it’s not like I’m seeing any huge celebrities that night, but for me it’s like I’m back in 1994; their awesomeness had just never worn out on me.

So the concert begins late, around 11:00, and I can clearly tell that these guys still thoroughly enjoy jamming together.  I love every minute of it, then they decide to break for a bit.  Sure enough, schoolmate goes down and talks to Marty, the lead singer.  A few minutes later ohmygod ohmygod they’re coming this way!  Once again I was introduced to a rock star, and nothing much could come out of my mouth.  I think at one point I even said that “In a Daydream” still gives me chills to this day.  Yes, I actually said that, and there wasn’t even a nearby rock for me to crawl under.  I did get to clink glasses with Marty, and when he asked me what I wanted to hear, all I could blurt out was “You’re going to play it anyway, you’re going to play it anyway.”

So there it is.  My second awkward encounter with a rock star, and probably not my last.  I was like one of Bret Michaels’ adoring fans/suitors from Rock of Love, really.  If that suitor were a sober, modestly dressed, easily embarrassed sort who can’t even work up the nerve to ask Bret for a picture.  Hence the attached far-away picture of Marty performing, sans my mug.  Enjoy.